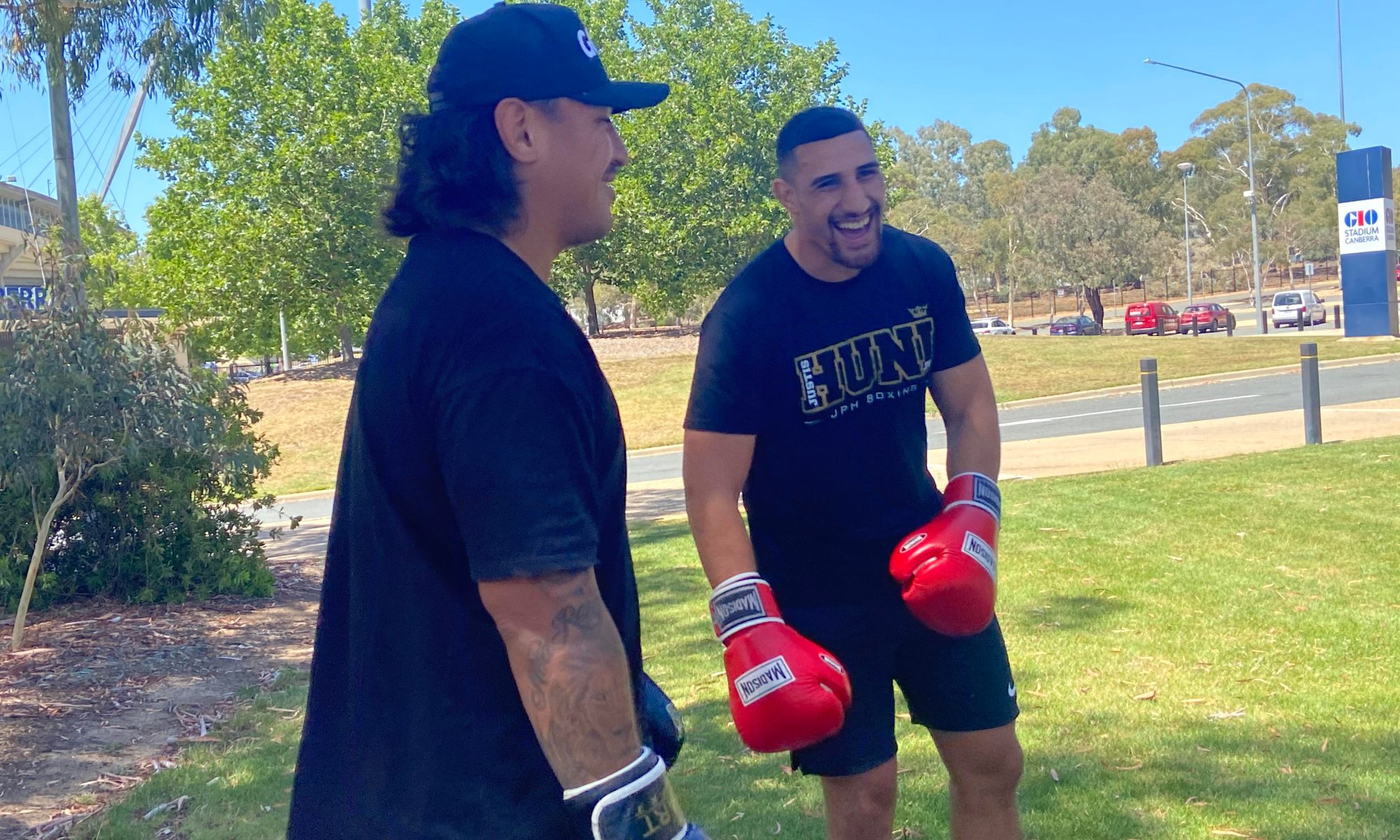 Justis Huni takes a moment to think about the names on the card he is about to headline.

He was a kid playing junior football with Souths Sunnyback when many of them were at their peak. Now 21, Huni (2-0) takes top billing ahead of them against James Porter (10-6) in the main event of the All Stars Rugby League fight night in Townsville on February 12.

Canberra Raiders enforcer Papalii joked Huni would “probably go well with me in the front-row” for the Green Machine.

There was a time Huni’s father Rocki offered an ultimatum: box or stick to rugby league with Souths Sunnybank.

“I was playing second-row, I still had that speed,” Huni laughed.

“I started [playing rugby league] when I was seven and I always played up a grade up until under 13s, that’s when I made the decision to do full-time boxing.

“I was doing boxing and rugby league at the same time, and then dad said me and my older brother [Lopeti] had to make a decision, whether we wanted to choose rugby league or boxing.

“We both chose boxing, and now I’m here.”

Here he stands with an Australian championship wrapped around his waist, a perfect professional record after two fights, and an ambitious plan for the future.

At first the prospect of four fights in a five-month span on the road to Tokyo seemed a tad ambitious.

But Huni is relishing the chance to stay active and head to the Olympics – should they proceed – with a perfect 6-0 record as a professional.

The postponement of the 2020 Games paved the way for a restructure which allows Olympic prospects to have up to 10 professional fights before arriving in Tokyo.

But there remains the genuine possibility the Games will be scrapped completely, though that speculation has been doused by the international and Australian Olympic committees.

Huni remains determined to go to Tokyo and return with a gold medal, which would mark Australia’s first in boxing.

“I’m keen to get back in there, there’s no other feeling like fight week and fight night,” Huni said.

“In the professionals, it’s been really exciting with all the media we do, I’m looking forward to it. Everything has been pretty good.

“I’ve just been taking one fight at a time in the pros. All of it is working towards my main goal, to get to the Olympics. That’s pretty much why I turned pro in the first place, to keep my development going.

“I try to keep my style, I’m just adding stuff to my style. I’ve still got all the movement I had during the amateurs but I’m just sitting down on my punches a little bit and just showing a little bit more aggression.

“Here in Australia it was hard, I was pretty much only fighting whenever we had trips overseas. It’s a good change.

“It was good to finish off last year busy, and knowing coming into this year that I had a busy schedule at the start. It’s exciting times.”

This story was originally written for The Canberra Times. Justis Huni was forced to withdraw from his bout due to a concussion.